I was recently motivated to kick off an initiative to collect new grad offer data for roles based in Canada. I posted this survey on Hackathon Hackers, Facebook groups, Reddit, LinkedIn, and other sources. To my delight, the survey received over 200 crowdsourced responses (60% which were software development roles). I went through all responses, carefully inspected the data, and then cleaned the data to provide a better reading and analysis experience.

Note: For this survey, the emphasis was on the tech industry. The numbers analyzed below are based only on software development related roles, and are represented in CAD currency.

What does a new grad offer package consist of?

The median and mean base salary were respectively $74,000 and $76,000. This is line with Glassdoor’s reported average for software developers/engineers.

How much are new grads making at tech companies in Canada? 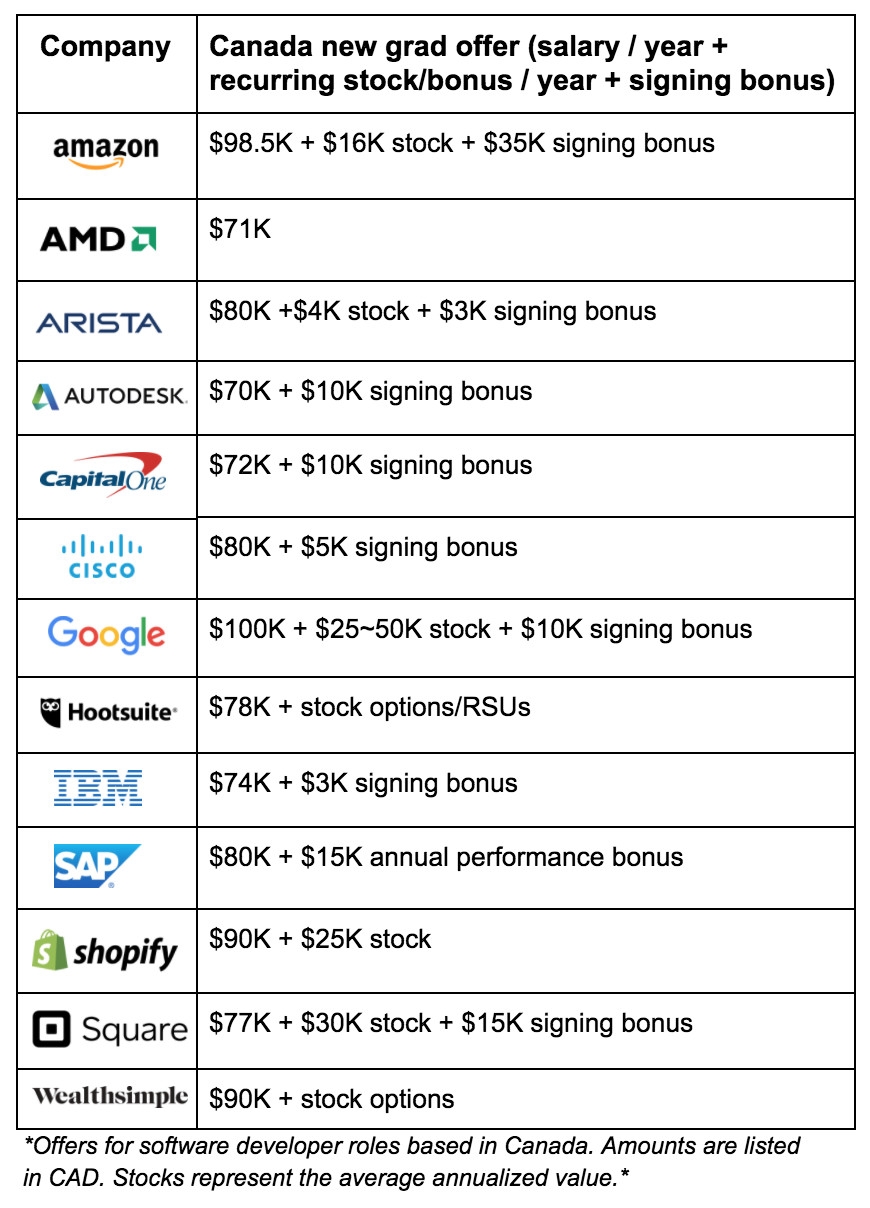 The graphic above is composed of new grad offers from selected tech companies in Canada. It’s apparent that large American tech companies (Google, Amazon, Microsoft) with Canadian offices pay the most to new grads. Some Canada headquartered companies like Shopify and Wealthsimple also pay quite well, with a total compensation package of over $100K. Given that the average base salary is around ~$75K, companies like IBM, AMD, Cisco all fall around that range. While these big name companies hire many new grads, it is not representative of what an average new grad should expect.

In short, if money is a major factor for you in Canada, aim for a Big N American tech company with offices in Canada, or a top Canadian startup/company like Wealthsimple or Shopify.

(Of course, there’s much more to life and decision making than just money!)

Of the 106 responses, females represented 16% of the responses. Their median and average base salary were lower than their male counterparts by about 5~10%. In this particular survey, this may not be statistically significant due to the small sample size. Unfortunately, in the general tech industry, there is no doubt that the gender pay gap is a problem.

Areas like Toronto and Vancouver yielded higher base salaries than other parts in Canada. This can be attributed to the higher costs of living.

The majority of the survey responses were from University of Waterloo and University of Toronto students. Waterloo students may have a higher starting base salary because they have 2 years of co-op work experience prior to graduation.

Of the 112 responses, 46 new grad offers were from people who previously interned at the same company. The base salary was significantly higher than the other groupings. One potential explanation is well-paying tech companies (i.e. Amazon, Google, Shopify) attract many interns, and then convert them to full time.

It’s evident that investing in a great internship program builds a great funnel for full time employees. I believe this is the key in retaining young Canadian tech talent in Canada. If an intern has a great experience at a Canadian tech company, they are more likely to sacrifice the additional compensation in US to remain in Canada. Sell them on the culture, not the money.

To university students: finding your third year internship might be one of the most impactful processes in university.

Over 50% of students don’t try negotiating at all. Negotiating is one of the most important skills in life, but it’s not something that’s taught in school. The students who were successful in negotiations had a higher salary than those who didn’t try.

Amongst the 77 males that responded, 21% were successful in negotiating, and 26% attempted negotiating but were unsuccessful. 53% did not attempt negotiating at all.

Amongst the 17 females that responded, 18% were successful in negotiating, and 18% attempted negotiating but were unsuccessful. 64% did not attempt negotiating at all.

This suggests that females are less likely to negotiate their new grad offers than their male counterparts. This is a potential reason why females are paid less.

In the grouping that were successful in negotiations, a $5K increase in base salary was the most frequent response. To new grads: why wouldn’t you spend 30 minutes negotiating for a chance to get paid $5K more?

In the 5 internship offers that I’ve accepted, I’ve attempted negotiating every single time. I was successful 3 times, and on average increased my annualized salary by $6 to 10K.

A second example is IBM Canada’s $3,000 signing bonus. If you don’t ask for it, you probably won’t get it. However, if you do try to negotiate and ask for it, there’s a solid chance they’ll offer the $3K to you!

Now, if we compare Canadian tech offers to US tech offers, we find a world of difference. Credit: Jesse Collins for compiling this data set and analysis. The numbers are in USD. 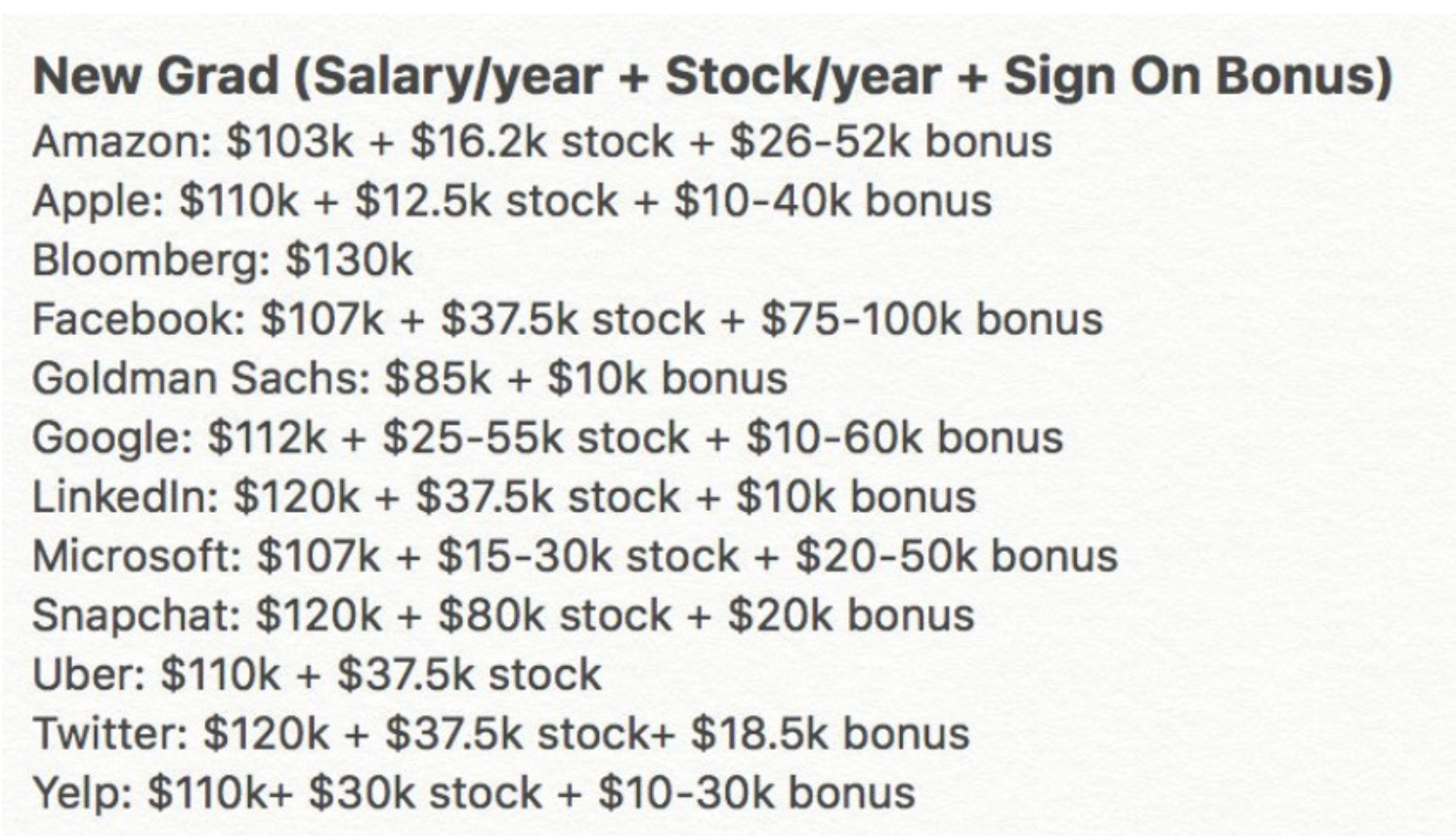 The average Canadian new grad offer was ~$75,000 in base salary and approximately ~$7,000 in combined signing and recurring bonuses. It’s important to note that the majority of Canadian new grad tech offers does not include a signing bonus or stock bonus. Students working at the highest paying tech companies should expect a number that far exceeds $7,000. Most students should expect a bonus that’s less than $7,000.

To further support this claim, the Software Engineering department at the University of Waterloo has generously shared the 2017 exit survey results with me.

The average new grad offer for SE 2017 students are not representative of what a new grad should expect. SE students complete six 4 month internships prior to graduation, and this particular survey consisted only of 17 Canadian data points.

In the section above, the US offers are significantly better than the Canadian offers. Now, if we consider cost of living, how much money do people actually take home?

Some may claim that the cost of living in New York, Silicon Valley, and Seattle are very high, and that a one bedroom place can cost $3,000~$3,500 a month. A one bedroom place may indeed cost that much; however, a reasonable new grad will not spend that much.

Amongst the 50+ Waterloo alumni working in the US that I’ve spoken to, the majority of them only spend $1,200~$1,800 per month on rent. They get their own bedroom, but have to share a house/apartment with a few others. In cities like Toronto and Vancouver, the cost of living is increasing and is becoming comparable to the major US tech cities.

In the figure below, I present a simple calculation of take home income after deducting tax, rent, food, and miscellaneous expenses. I used these two sites for income tax calculators: US tax and Canada tax. For rent, I assume you get your own bedroom and share a place with 2-3 others. For food, I assumed a constant value of $600. This figure highly varies based on the individual. Many tech companies in the US also provide 2-3 meals per day. I assumed a conservatively high value of $500 per month for the ‘other’ section, which includes entertainment and other miscellaneous expenses.

Considering just the base salary, the take home income in US offers yield ~40% more than Canadian offers. Now, if we consider the total compensation package, which is about $141,000 USD for US offers, and $82,000 for Canada offers, then the gap widens to 80% more. In the chart below, I simplified the calculations by adding the signing bonus and recurring bonuses directly to the base salary. I am not a tax expert, and there may be minor implications caused by this simplification.

The calculations do not consider deductions, RRSP matching, TFSA, compound interest, and the current bullish market. These considerations would increase the actual value of an individual’s financial portfolio, and further widen the gap between US and Canada. Furthermore, these calculations assume the perspective of a new grad who is willing to share a unit with 2-3 others. If I had assumed an individual pays $3,500 a month for a 1BR apartment in SF/NYC, then the gap would be narrower.

Applying the same expenses calculation above, the take home income for Shopify ($115K total compensation) yields $58K CAD. If we cared only about the local currency, then this is comparable to a US company in the US which has a total compensation of $141K.

To summarize, most Canadian new grad offers are not comparable to the US opportunities. This is the major reason why so many of my peers and Waterloo friends will move to the US after graduation. If we look beyond new grad offers, the pay difference between US and Canada tech compensation grows even larger.

If we want to retain Canada’s tech talent, Canadian tech companies must:

I kicked off this initiative because I wanted to promote transparency of new grad offers in Canada. I also previously led an initiative to collect internship reviews and salaries: InternCompass.io. I’m graduating in August 2018, and I have to make one of the biggest decisions of my life: where do I begin my career? This question inspired me to work on this initiative. I hope that this article will help many new grads with their decisions and process.

I’ve had an opportunity to live and work in the major tech hubs of USA: Silicon Valley, New York, and Seattle. I grew up in Toronto, and genuinely think it’s one of the best places in the world. Compensation is just one of many factors; however, when there is such a significant pay difference, it’s hard to overlook.

I find it quite unfortunate that there exists a huge brain drain problem in Canadian tech. The government grows strong talent for 22 years, nurtures them with excellent healthcare and subsidized education programs, only to lose them to large US tech corporations. Tech CEOs in Canada often complain about the brain drain issue, but only a few companies like Shopify and Wealthsimple are actually putting money where their mouth is. This post serves both as an avenue to promote transparency for students, as well as an open letter to Canadian tech CEOs to take action.